Risk Tip #2 – how do we measure control effectiveness?

In order to answer the question as to how we measure control effectiveness, it is worthwhile to go back to the start and define what a control is.

Essentially, a control is something that is currently in place to reduce risk within an organisation and/or an industry.  They have often been brought in as a result of a previous situation or incident. Note, in many cases these situations or incidents arise, not because of a lack of controls, but because of a failure of existing controls.  So the real key to managing risk effectively is to ensure that our controls are effective.

There are three key categories for controls:

As you can see, controls are absolutely crucial in the management of risk.

So, are all controls made equal?

The answer to this question is, obviously, no.  What separates those controls that are critical and those that are far less important is the consequence of the risk should it occur.

There are risks within any organisation that, if they were to materialise as an incident, would have serious implications for the ongoing viability and survivability of the organisation (the severe/catastrophic consequences in the consequence matrix).  These must be prevented.

The way we do this is through the controls we have in place.

Let’s say we are working at a major hardware chain in the plant import and distribution part of the business.  The identified risk is:

There are a range of controls including (but not limited to):

The key here is that we want to make sure these controls are as effective as possible as any failure of one or more of the controls could lead to the risk materialising.  These controls are critical controls and, therefore, must be the subject of assurance.

The relationship is shown in the diagram below: 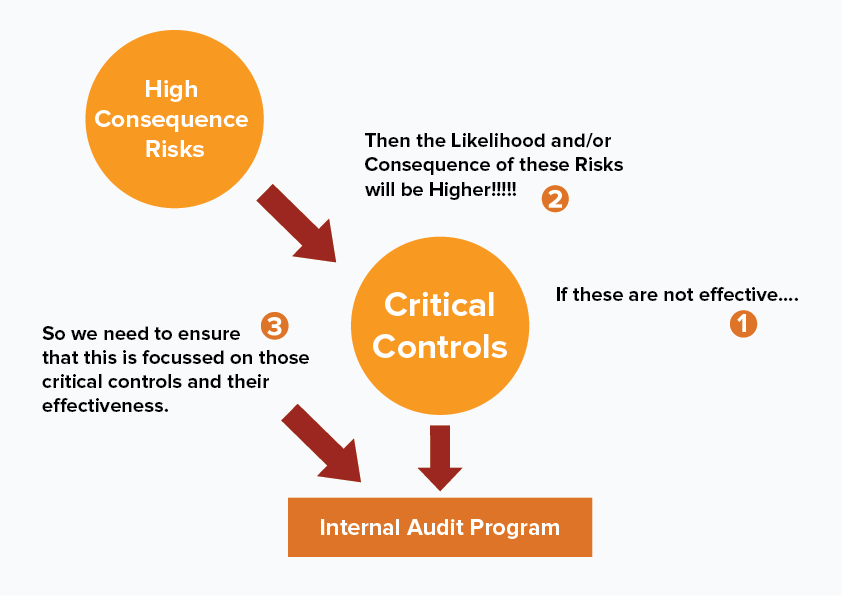 The next step – control criticality

Here’s a way it can be done:

Having identified the controls against the risks with the highest level of consequence and then assessed them for their criticality, we now have a list of controls associated with that risk that, not only need to be effective, but require evidence of effectiveness.

But the biggest question – what does effective look like?

Organisations continue to find it difficult to assess the true effectiveness of the controls. Some will use Control Self Assessments (CSA), however, it is very rare that control effectiveness is measured against performance measures developed specifically for the control.

Let’s use an example of a wharf where the risk has been identified as: Catastrophic material failure of infrastructure.  We have identified multiple causes, the first of which is: Lack of/ineffective maintenance. Against this cause, we identify the following controls:

For the first control – preventative/routine maintenance, the following performance measures are developed:

For the second control – inspections, the following performance measures are developed:

Provided we actually undertake the measurement of the controls, we can now provide evidence of effectiveness to management.  In doing so, we are providing them assurance that the risks with the most significant consequences to the organisation should they materialise, are being effectively controlled.  This level of assurance cannot be provided when control effectiveness is guessed rather than assessed.

The three lines of defence of control assurance

Obviously, we don’t need the same level of assurance for all controls – the resource impost would be significant, for questionable value.  To that end, we need a methodology that provides the ability to separate those controls that require further assurance from those where Control Self Assessments are sufficient.

The first step in this process is to prioritise the controls. The following matrix can assist:

Once prioritised, we can use the following three lines of defence model to assist in developing our audit program:

At the completion of this process we have a prioritised list of controls that inform both our internal and external audit program – a true risk based auditing approach.

To truly manage risk, rather than ‘doing risk management’, it is essential that the control environment within the organisation is effective.  We can ill afford, however, to simply estimate (or guess) whether our controls are effective.

So, what do we need to have in place in order to provide the level of assurance to management that the controls relating to their highest consequence risks are effective?  For each control we need to identify:

Put simply, if you can’t prove your controls are effective, you are not managing your risks.

One of the areas that organisations find difficult is determining the effectiveness of controls, something I have written about previously on how we measure effectiveness. The most significant challenge I have noted is the development of performance measures for controls in order for effectiveness to be measured. The methodology I have developed to assist organisations […]

I love reading risks treatments in risk registers – they are always so descriptive.  Some of the treatments I have taken from risk registers over time are shown below: better communication; training in contract management; rolling fraud audit program; additional physical security; more management oversight and action; better change management; and/or recruit additional staff. increased […]

Risk Tip # 8 – Capturing the right risks in your risk register

FREE RISK MANAGEMENT E-BOOK
This free E-book dives into risk management, exploring the issues and concepts involved in effectively managing risks in an accessible and comprehensive manner applicable to organisations of all shapes and sizes.
{Download-submit}
close