Who let the dogs out

Who let the dogs out

The words on their own are innocent. These words, however, when combined with the antics and the excessive alcohol consumed by the players creates a disturbing picture.

So, in the wash-up of the September episode, two of the club’s biggest sponsors severed ties with the team. The National Rugby League (NRL) was, once again, in damage control in the middle of the finals series which is the showpiece of the season.

As a risk manager I can tell you this one is not easy. I gulp every time we get to the ‘mad Monday’ season frenzy because I know there is only so much you can do. What frustrates me the most is that they’re ‘repeat offenders’ as a group. At what point do they learn from their past mistakes and peers’ antics? You would think one ‘mad Monday’ was enough but no, there have been several and the tolerance for this ‘celebratory’ episode is waning – badly.

Back in 2009 I started my sponsorship of the Manly Warringah Football Club. My first function was infamous for the fact that it resulted in charges being laid against one player and another assaulting a sponsor at the function (not me fortunately).  After that incident and a couple more, I wrote a piece that was published in a rugby league magazine at the time.  Here is an excerpt from that article:

When Manly met the Storm in May of this year, a rivalry that has arisen out of successive Grand Finals meetings was rekindled.  The game was held on a pleasant Friday evening at Brookvale Oval and Club officials could be forgiven for believing that the game would draw a bumper crowd keen to prove to the Southern visitors that the 40 nil score-line the previous October was no fluke.  The crowd that showed up that night, however, was a meager 10,000 – well below that which was forecast and budgeted.

So, what has this got to do with Risk Management?

We hear it continuously from Club Officials and commentators from within the game that unlike the ‘good old days’ rugby league in 2009 is a business – a business like any other business – that is required to generate more revenue than is expended in order to generate a profit…Revenues are down; costs for players are up; competition in the form of other football codes is drawing sponsorship dollars away and then there is the impact of the global economic crisis.  Even in the best of times, the financial viability of most NRL clubs remains tenuous.

If clubs are to remain viable and sustainable in this climate, it is also extremely important that the game remains in the headlines for positive reasons, however, as we have seen over the last few years, any positive headlines have been overshadowed as the game seems to stumble from one crisis to another.  Each of these crises has had a profound impact on not only the game but the Clubs involved.  The reason for this impact is best explained by the diagram below: 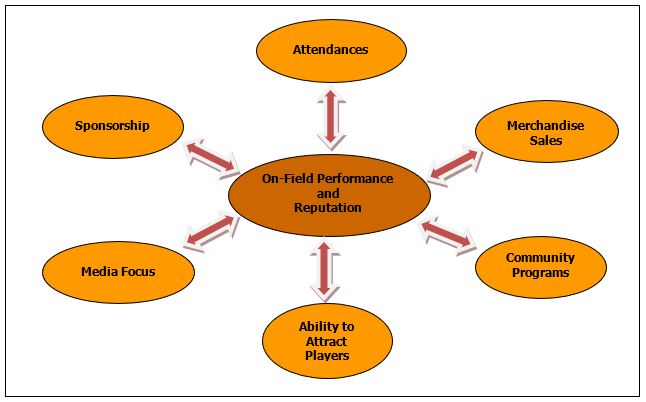 What we conclude from this diagram is that on-field performance is only one of the primary drivers for clubs – reputation also has an enormous impact.

If we relate the Manly example to the diagram above, we can get a sense as to why such a relatively small crowd turned up for the Melbourne Storm game.  On field performances were well below the expectations of the Manly faithful (based on the fact that the club were the reigning Premiers and had won the World Club Challenge) and the incidents arising from the infamous season launch function meant that the reputation of the club had also been significantly tarnished.

So, if this is the environment in which Clubs operate, what can they do to ensure that their long-term viability is assured?  One option Clubs have is to approach their business in the way that most other multi-million-dollar businesses do – develop and maintain a risk management program aimed at preventing incidents occurring in the first place and reducing the severity of incidents that do occur.  The other option, of course, is to hope that incidents won’t occur and crisis-manage when they do.

I would contend, however, that all CEOs would prefer that incidents like those that have plagued the game in recent years do not occur in the first place.

“The Board would like to state for the record that we are very disappointed by the events that took place after our Season Launch last Friday. There is no doubt if we had our time again we would do things differently” – Manly Board Chairman, Scott Penn March 11, 2009.

If we accept that hindsight is 20-20 vision, then surely foresight is invaluable – and that is the challenge for club administrators – to understand the culture of the organisation to the degree that potential issues can be identified, and strategies put in place to minimize the risk that they occur.

Since that time some progress has been made and in Manly’s case the players are now no longer permitted to consume alcohol at sponsor/fan functions.  However what this reactive approach was not acknowledging was that in many cases the incident could have been avoided in the first place.

It needs to be recognised by, not just NRL clubs, but teams in all sporting codes, the damage that this risk can cause if it becomes an issue.

So, my question is this: with all of the issues that have happened with mad Monday celebrations in the past – particularly in light of the other off-field scandals – how on Earth were they even allowed to be in that position?

Make no mistake: this is the Club’s risk and it should have been managed by the club!!!!

The public (and sponsors) are sick of hearing apologies and excuses after the event.  They are also sick of hearing the same old tired assurances that things will be put in place to prevent it happening again.

And then it does.

So, what is the solution? Is there a solution?

We’re not just talking about mad Monday now, we are talking about any behaviour at any time that tarnishes the reputation of a club and code and may jeopardise lucrative sponsorship as well as attendances and merchandise sales.

The first thing players need to be aware of is that they are always under scrutiny and, therefore, it must be assumed that any behaviours outside the law or contrary to accepted community standards will be seen and will be reported.

But before we run off and come up with the solution that alcohol should be banned for all players during a season, consider this:

When managing a risk such as this, we need to first understand that we can never eliminate the risk, so we need to develop and implement a wide-ranging suite of preventative, detective and corrective controls.

Let’s look at the risk of fraud. The controls for this risk include, but are not limited to:

In the case of the risk facing sporting clubs, there are a significant number of preventative controls including but not limited to:

There are corrective controls:

In the case of this risk, however, there are no detective controls that can be reasonably employed, short of assigning a minder to each player that can remove them from the situation before the behaviours deteriorate further and an incident occurs.

So, potentially we need to think outside the box.

So, if I was a risk manager at one of these clubs, the first thing I would do would be to identify the potential specific events and, where appropriate, seek to add additional controls.  Let’s look at some examples:

Of course, as previously stated, the risk cannot be completely eliminated, however, clubs seem prepared to react to incidents rather than be proactive in their prevention.

Whether they consider it fair or not, elite players in all sporting codes are subject to increased level of scrutiny.  Any illegal or anti-social behaviour will most likely be observed and the consequences to the player, the club and the code can be catastrophic – and so they should be.

We are, however, dealing with human beings who, like other human beings make mistakes or display poor judgement. I, for one, am in no position to criticise the individuals and I am sure many of us would be in the same boat.

The onus then falls onto the clubs, as well as the individuals to ensure that everything can be done and to avoid, where possible, exposing the players to situations or condoning activities that have the potential to get out of control.

Risks such as this cannot be eliminated, but what the Bulldogs scandal has demonstrated is that hope and prayer are not risk management strategies – and neither is denial.