The ABC went on to report that the multi-billion-dollar project near Geneva in Switzerland, is designed to smash sub-atomic particles at close to the speed of light, when it unexpectedly lost power, despite a series of sophisticated safeguards.  A weasel, weaselled its way in and as reported by CERN, the LHC’s operator, chewed on a 66-kilovolt electrical transformer.

The CERN spokesman said it would take a few days to get the facility back to working order after the weasel’s visit. “Not the best week for LHC!” he said.

But this is not the first time a rodent has had significant impact on a facility. In fact, it happens a lot more than you may think.

As detailed at http://cybersquirrel1.com/ since 1987 there have been over 1100 disruptions to electricity supply caused by rodents.  As shown in the table below, squirrels are the biggest culprit. 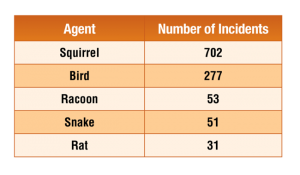 This should not happen!

All organisations that operate critical infrastructure such as electricity exchanges, telephone exchanges, railway control systems and operations centres need to recognise the possibility of rodent damage as a cause of disruption to their services.

The organisation should have in their risk register:

The root causes should then be identified – one of which may be damage by pests/vermin.  That being the case, we need controls in place. These could take the form of:

Given the often catastrophic consequences of these disruptions, all controls, including those relating to pests/vermin must be effective. If you don’t you may suffer the same fate as the multi-billion-dollar Large Hadron Collider.