What a load of rubbish

What a load of rubbish

Hear my interview on Canberra’s 2CC about business continuity.

The ACT garbage truck dispute is causing a bit of a stink. But the real issue is not necessarily about the industrial dispute itself, it’s more about the ACT Government’s response to the disrupted service that’s the more interesting aspect to this smelly saga.

One thing you learn in risk management is that ‘history can (and does) often repeat itself’ and therefore there are very few excuses for not managing potential, feasible and anticipated events, particularly when that event has already happened in the same organisation.  The current disruption to ACT rubbish removal fits into this category as this is not the first time an industrial dispute has interrupted services.

In 2014, Transport Workers Union members went on strike claiming the contract under SITA, the new government contractor at the time, was paying them $100 less a week, compared to the pay and conditions offered under the previous contractor, Cleanaway – despite an assurance from the ACT Government that no worker would be worse off with the change of arrangements.

During the 2014 strike, the then Chief Minister Katy Gallagher put the responsibility squarely with the contractor and, during a radio interview stated how public servants at the Department had been working hard to develop strategies to clear the backlog but it was the contractor’s responsibility that the service continued. (What a load of rubbish!)

Upon hearing the Chief Minister’s assertion, I rang the radio station and reminded her that, as the owner of the function and the organisation to which residents paid rates, the ACT Government was responsible for the continuity of the function – regardless of what caused the disruption.

Fast forward to 2016 and, once again we are in the midst of a disruption to waste removal and, once again, the Government is unprepared and has to implement emergency measures such as drop-off points for residents to dispose of their rubbish.

So let me see if I have got this right.  Rubbish disposal has now become the ratepayers’ responsibility?

Back in May, Tim Shaw from 2CC in Canberra interviewed the Minister responsible, Meegan Fitzharris about this latest dispute, and re-visited the point I had raised with Katy Gallagher in relation to business continuity.

During the interview the Minister encouraged the company and the union to come to an agreement as soon as possible.  When Tim Shaw asked “what’s your government going to do Meegan Fitzharris if we do not get a resolution by Friday?”  The Minister’s response absolutely floored me when she said “let’s wait to see”.

She went on to say “we will do what we can to make sure there are drop off points for people. I know it’s less than ideal but in these circumstances …. we don’t have the capacity to provide additional services other than to provide as many drop off points as possible – to make those free for people who have missed out on their rubbish collection over the past couple of days”.

(Technical point here: while the drop off points might be “free” we’re still paying our rates but doing the work for the ACT Government).

She went on to say (and this is just wonderful) “I do encourage people who are impacted to see if they can find other solutions throughout the course of this week.”

Tim then asked the question I had raised about business continuity and the responsibility of the government to maintain the service during times of disruption.  The Minister’s answer stayed on message about temporary drop off sites and to encourage people to minimise their waste.  That is not continuity of the service!!!

So what is wrong here?

First up, the ACT Government owns the function, not the contractor, they are just being paid to undertake the task.

Secondly, there is absolutely no plan if the disruption is a result of anything other than industrial action.

What we are talking about here is a disruption-related risk and as we can see from the risk assessment below, industrial action is but one issue that could lead to the disruption.

So let’s look at a scenario where the regulator inspects all of the rubbish trucks and, because they have not been maintained in accordance with regulations in an attempt to reduce contractor costs, the entire fleet is grounded (an issue currently being faced by Baiada).  What then?

What about a scenario where there is a fire at the depot and all of the trucks are damaged or destroyed?  What then?

The ACT Government is responsible for the continuity of the waste removal function, regardless of the cause of the disruption.  The Government was not prepared two years ago and it is obvious that nothing has changed as we see history repeat itself.

Let’s hope that the strike ends soon or we will be knee deep in it. For the full suite of available risk management courses visit https://paladinrisk.com.au/training-services/ 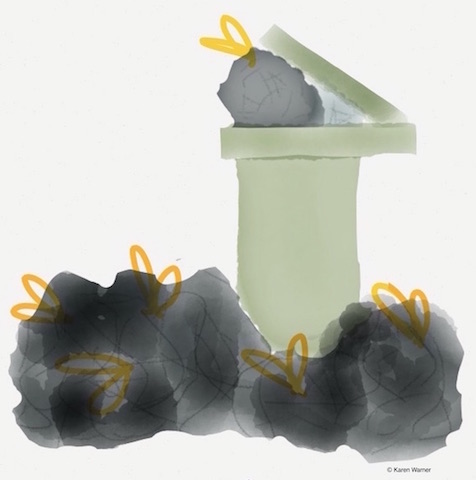