Colonel – we have a problem

Colonel – we have a problem

In mid-February KFC announced that it was shutting the majority of its stores across the UK and Ireland due to, of all things, a chicken shortage that was caused by the introduction of a new delivery contractor, that had taken over from an established food distributor that had worked with the fried chicken brand for some years.

A crisis of this magnitude is unprecedented in modern history.  Given the size of KFC, it is not unreasonable to expect that the chickens will just keep on arriving and stores will keep selling the deep-fried treats to the millions of customers who rely on the Colonel for part of their dietary intake.

So, let’s look at this in some depth.

The risk in this case that I would have captured in the risk register is as follows:

The first thing to do is to identify the potential causes:

Although not completely familiar with the controls that would be/should be in place, below is an overview of what some of those controls might/should have been (stressing that these are an outsider/layman’s view of the organisation): 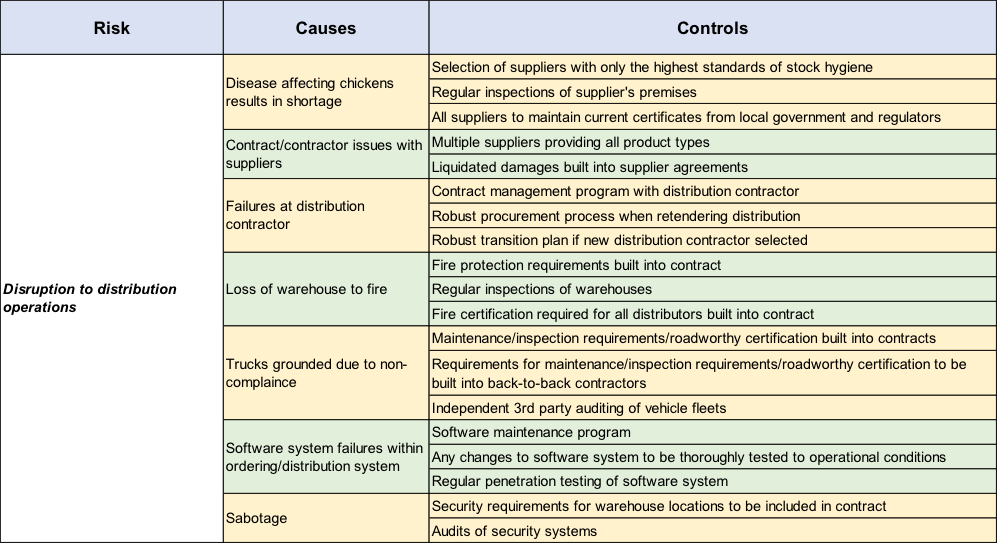 I have also assigned criticality to the controls based on the following table:

So, what does our risk register look like with all of this information included? 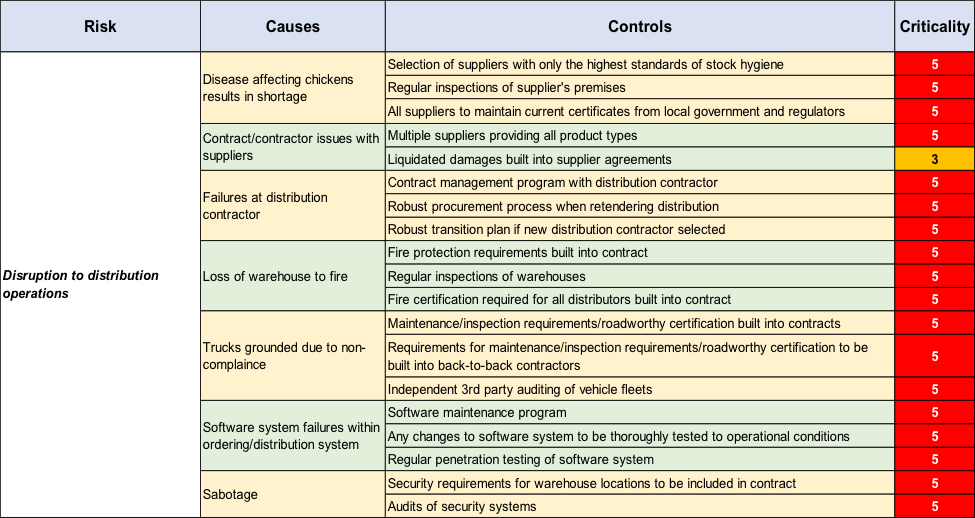 No surprises – this is one of KFC’s biggest risks, so all the controls would be critical.

The issues surrounding this risk did not materialise until after the awarding of a contract to a new distribution company.  What this shows us is how important it is to continually assess the level of risk when the environment changes.

If we use the Likelihood Matrix below, we could assume, because there had been no such disruption previously, that KFC’s control environment was either very effective (most likely) or they had been extremely lucky:

To that end, prior to the commencement of the procurement process, I would have assessed the risk as follows:

Prior to embarking on the tender process, it would have been important to recognise that, if there was a change of contractor, during the transition period, the likelihood of the risk would increase, based simply on the fact that the company was moving from a known to an unknown.  To that end, I would have changed the risk level at the time the announcement was made to be as follows:

As a result, there should have been a significant emphasis on the controls during the transition to the new contractor.  The likelihood may have increased further if the warning from the GMB Union had been taken into consideration:

When you consider that:

then it would be fair to assume that these controls were not in place and were not effective.

What this clearly demonstrates is that whenever there is a change in operations or a new project within an organisation, there needs to be an assessment done on the extent to which the change or project will impact on the current risks to the organisation.

No chicken and no gravy makes for a massive hit to reputation as well as to the bottom line.